The Art and Intricacies of Manscaping – by Andy Garcia 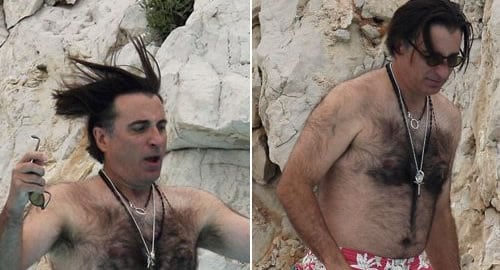 Should you be MANscaping? Actor Andy Garcia is here with the low down on shaving your down low.

Back hair is never a desirable trait, but if you’ve got it, you’ve got it. Every once in a great while you’ll run into that one guy who says, “Chicks love it man!” Not true.

In fact, the only time back hair was ever celebrated was during one of Alec Baldwin’s sex scenes and when WWF wrestling great George “the Animal” Steel would prance around the ring doing pirouettes and chewing on turnbuckles.

Entertaining? Sure. But when it’s time to leave the beach and you have used napkins and goops of sunscreen stuck in your back muff, it’s time to act.

Stop shaping your eyebrows. Eyebrows are not meant to be shaped, but contained. For example; Bill Berry, former drummer of the famed R.E.M. No shaping needed here. But containment; YES.

On the opposite side of the spectrum you have Whoopi Goldberg who only has eye bones; no hair to be found. Now, this type of grooming gets swishy and can be associated with alien like qualities.

This segment is about MANscaping and up to this point Whoopi has been considered a woman, but until it’s confirmed officially by certified medical professionals, Whoopi is a classic example of what not to do for men everywhere.

Pubic hair is usually the first concern for the majority of men, mostly due to the fact that no one wants to walk around and feel like they’re creating static electricity between they’re legs.

Richard Simmons hairdo is a good measurement to see if you need to mend your man bush. Feel free to create and customize your pubic region in any shape, color or combination of both. Even a Hibiscus pattern, perhaps?

As Richard Grieco once said, “A woman doesn’t want to reach down and feel like she’s sticking her hand in a raspberry bush.”