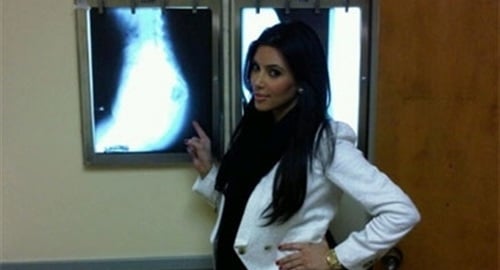 America’s sweetheart Kim Kardashian has announced that she has received the terrifying news that she has been diagnosed with malignant ass cancer.

As you can see in the photo above Kim Kardashian bravely points out the large tumorous mass on the x-ray of her ass. Doctors have told Kim, that though it is one of the largest malignant ass tumors they have encounter, it is not inoperable and they have given Kim good odds of coming through the operation cancer free.

However, Kim has rejected treatment and flatly refused to consider getting her ass tumor removed. Apparently Kim feels life just isn’t worth living if she does not have an abnormally huge ass. Kim’s sister Khloe summed up her sister’s opinion,

“Can you imagine Kim Kardashian being able to eat at ‘Waffle House’ without armed guards keeping the patrons at bay? Kim doesn’t want to live in a world like that, and I wouldn’t either!”

With her ass cancer going untreated doctors give Kim just 3 months to live, less if Islam conquers America before then. Allahu Akbar!