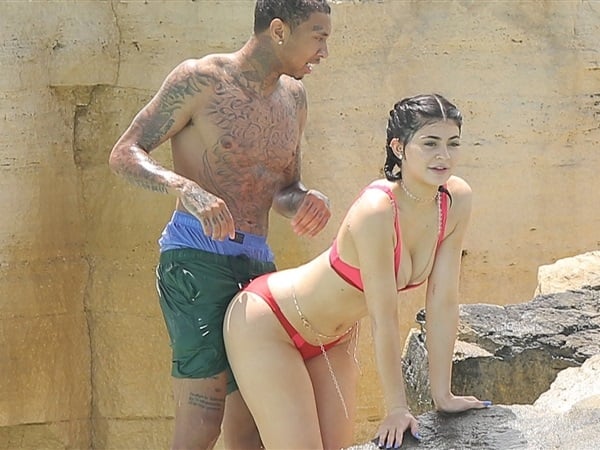 As you can see in her big booty thong bikini photos below, Kylie Jenner’s birthday vacation just keeps getting more and more depraved.

Not only is Kylie Jenner walking around with her bloated ass cheeks out flapping in the breeze, but she is now shamelessly simulating sex acts with her pet chimp boyfriend Tyga. Of course in Tyga’s defense he has no choice but to go along with Kylie’s degenerate sex show, as like all dirt skins he is a weak-willed savage who is hopelessly addicted to Kylie’s engorged rump.

By getting her hindquarters surgically enhanced with fried chicken grease and grape drink injections Kylie has developed the ultimate weapon to enslave black males, and now Kyle brazenly parades her conquered nig nog man around, riding him like an animal, and then burying him in the sand. A plantation master’s whip would certainly not be as emotionally damaging as Kylie’s heartless humiliating antics.