Kylie Jenner Shows Her Nipple Piercing In A See Thru Bra 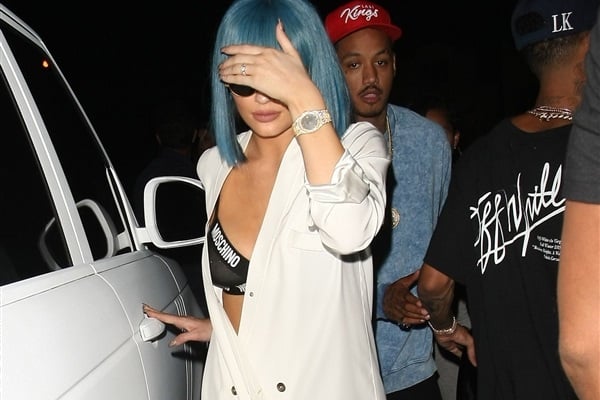 Reality TV star and professional mudshark Kylie Jenner shows off her nipple piercing in a see through bra in the first two photos below (which are followed by some bonus recent Snapchat pics).

Kylie going out to a club while displaying her nip piercing like this is really unfair to black guys, as everyone knows that dirt skins are attracted to shiny objects. Add to this the fact that Kylie dabs fried chicken grease between her tits, and the abid males do not stand a chance of resisting her.

Yes Kylie clearly knows every trick in the book to attract the Sub-Saharans. Of course that is probably because instead of sending her daughter to school as a child Kylie’s mother Kris had Kylie stay at home and watch BET while sucking on Fudgesicles. Unfortunately for Kylie us Muslims do not allow interspecies relationships (unless of course the goat is particularly beautiful) so she must stop her coal burning ways immediately or face our wrath. Also the only piercing a woman should have is one through the nose for her owner to attach his chain too, so those nipple bars have got to come out.