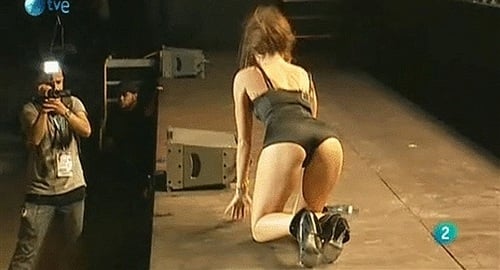 You know a lot of sites (including this one) have been giving Miley Cyrus a hard time for her new “sexy” image just because she dresses and acts like a sex crazed hooker. However, as you can clearly see in the video below Miley Cyrus has appeared to have turned over a new leaf.

Miley has decided to embrace Islam the one true faith. Of course as a beginning Muslim Miley does not have the proper form when performing the “Salaat” or prayer.

Miley has the getting on all fours and facing Mecca part right, but she is messing up on the “Sudjood” were she prostrates herself to Allah. Miley needs to learn that instead of arching her back and sticking up her butt, she should put her hand on her knees and allow her forehead to touch the ground. With a little practice she will perfect it, and become a proper Muslim woman.

The power of Allah is great. If he can turn the slut Miley Cyrus into a respectable woman there is no limit to what he can do. Miley Cyrus fans take heed of your idol and embrace Islam as it is the only path to salvation. Allahu Akbar!