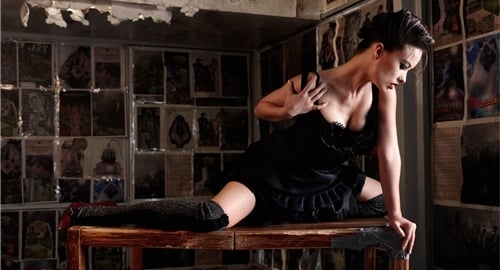 There is nothing more disgusting and offensive than a woman expressing herself in a sexual way. That is why these pictures of Olivia Wilde in Flaunt magazine should be destroyed and everyone involved in the making of them should be prosecuted to the fullest extent of Sharia Law.

There are so many things morally wrong with these pictures of Olivia Wilde I don’t even know were to begin. First she has her hand down her pants on the cover picture. Now we can only hope that Olivia has some sort of yeast infection and that she is not pleasuring herself sexually, but by the look on her face I say that is unlikely.

The pictures go on to show more degenerate sex acts by Olivia Wilde, including humping a table and collecting leaves in the nude to insert into her vagina.

Yes there is nothing Allah despises more than a woman’s sexuality and Olivia Wilde is blatantly flaunting her’s in these pictures. She must be punished! Allahu Akbar!